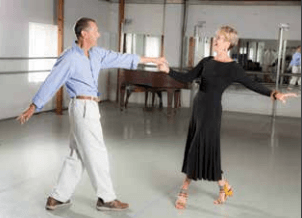 After surviving cancer, Mike and Nancy Hebson are no longer “saving a dance.”

Nancy Hebson had danced through most of her life. Her mother and two aunts performed with the Radio City Music Hall Rockettes. Nancy herself began ballet lessons at age 4. For 21 years she has taught ballet at the Lauridsen Ballet Centre, a school in Old Town Torrance. But one dream still eluded her—taking ballroom lessons with Mike Hebson, her husband of 28 years.

Mike thought he had plenty of time to dance. Life was good.

“I was a product of the 60s and 70s. I grew up at the beach and had a great time in the South Bay,” he says. “I was an occasional smoker, but quit drinking and smoking in 1995. I have never been sick a day in my life.” He had a successful print and digital ad sales career and worked out daily—swimming, lifting weights and snowboarding in the winter. He received a clean bill of health at his routine physical in January of 2012.

“I had been paying for medical insurance for 30 years and didn’t need it,” he says.

But within just three months, Mike’s world began to change. “I started having shortness of breath, fatigue and weight loss,” Mike says.

Worsening symptoms led him to visit Torrance Memorial Urgent Care. Concerned by what he saw, the doctor sent Mike to the Torrance Memorial Medical Center’s Emergency Department (ED). That evening two liters of fluid were removed from his lungs. A few days later he returned home but continued to undergo tests, including a biopsy and PET scan. Two weeks after his ED visit, Torrance Memorial Physician Network Oncologist Hugo Hool, MD, presented the Hebsons with a grim diagnosis. It was likely Hodgkin’s lymphoma stage 3. There was still another test to perform—a bone marrow biopsy. In most cases, Dr. Hool assured, the cancer doesn’t infiltrate the bone marrow. But results confirmed this worst possible scenario— stage 4 Hodgkin’s lymphoma.

“I actually thought that was good news,” Mike says. “I thought there were 10 stages.” Stage 4, the highest in the cancer stage rating system, is also called metastatic cancer or advanced cancer. It means that cancer has spread to other areas of the body. Despite the sobering diagnosis, Dr. Hool and the care team immediately set a tone of optimism.

“Dr. Hool was so knowledgeable, calm and positive. And I’ll never forget Donna, our first nurse. She told us that patients who come through here and stay positive do better,” Nancy says. “She said ‘This is going to get a little crazy. You’re going to need help. People are going to offer to help you and you’re going to say yes.’”

Nancy continues, “We jumped on the positivity band wagon and decided we were going to hand this over to the big guy. We didn’t go on the internet. We did everything Dr. Hool asked us to do. Donna gave us a chemo class and walked through everything that would happen.”

Dr. Hool recommended that Mike undergo treatment with an aggressive regimen of BEACOPP, a new powerhouse chemotherapy drug developed in Germany that had already produced successful results with a number of his patients.

“Dr. Hool gave me two choices—chemo or death,” Mike says. “I jumped in with both feet.”

Mike received his first round of chemo at the Torrance Memorial Physician Network Cancer Care offices located in Redondo Beach.

The chemo not only blasted the cancer, but also Mike’s immune system. Unable to breathe or swallow, Mike returned to the ED. He remained in the hospital for more than a week and received several different antibiotics, antifungal and antiviral medications to tackle various infections.

Torrance Memorial Home Health nurses then followed up with a home visit to teach Nancy how to administer antibiotics to Mike through a PICC (peripherally inserted central catheter) line. BEACOPP killed most of the cancer. To wipe out the remaining cells Mike continued on a modified formula of chemotherapy.

“If we would have had to drive somewhere far away, I don’t think we could have done it. We were very blessed that Mike never had to leave the South Bay for his care,” Nancy says.

When Mike walked in for a post-treatment PET scan, the radiology tech looked surprised to see him.

“He said to Mike, ‘I remember you; I did your first scan. I thought you had died,’” Nancy says. “Mike was saved by chemo, good doctors and the grace of God. He shouldn’t be here today.”

Mike has always had a soft spot for Torrance Memorial. One of his first photos is of his mother holding him as an infant as she stood at the window following his birth, in the original Torrance Memorial Hospital on Engracia Avenue in Old Torrance. Earlier this year, Dr. Hool invited Mike and Nancy to speak to members of Torrance Memorial’s Ambassador Program about his experiences at Torrance Memorial’s Hunt Cancer Institute at an annual dinner for the group. The group supports Oncology Services, as well as the Torrance Memorial Burn Center, Rehabilitation Services and Health Education. They agreed without hesitation.

“I had been super sick and almost died. Now I’m going on almost five years (of being cancer free),” Mike says. “My treatment at Torrance Memorial was such a success. I really wanted to speak at the event.”

“Craig and I played little league together and I hadn’t seen him in almost four years.”

After such a close brush with death, Nancy wasn’t going to let more time slip by on her remaining dream. She asked Mike once again if he would take dance lessons with her. As soon as Mike was strong enough, they signed up for six consecutive sessions in the fox trot, rumba, cha-cha, tango, waltz and swing at the Torrance Adult School. Friends now call the couple Fred and Ginger. “When you go through something like this, your whole life changes,” Nancy says.

“When you’re given the choice to sit it out or dance, you better be dancing; because you never know what’s going to happen.”