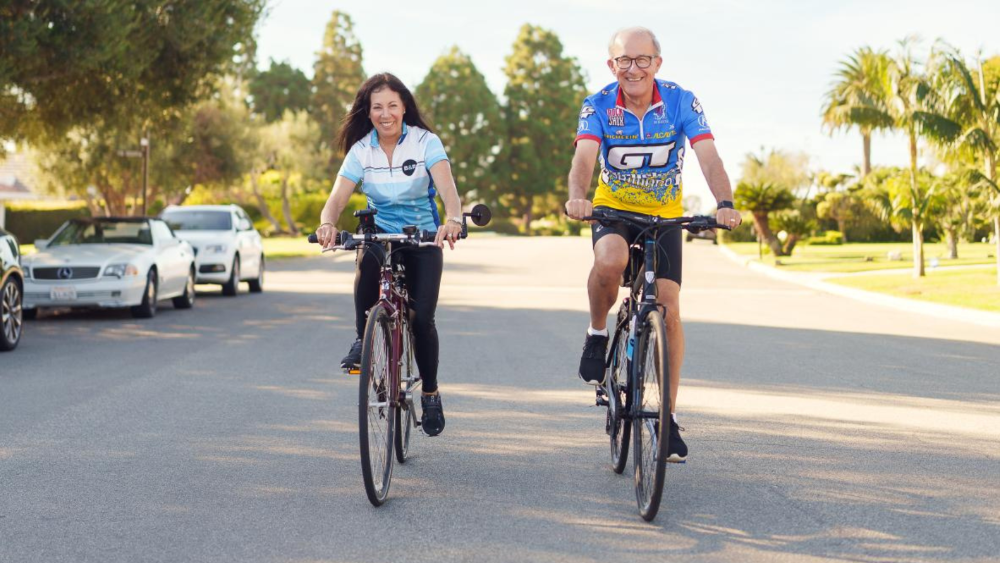 Charles (Chuck) Noski was only 11 years old when his father sat him down and said it was time for him to choose a career. “I think you should be a CPA,” said his father. To which Chuck promptly responded, “What’s that?”

The youngster went to the library to research what a certified public accountant does. Impressed when he learned a college graduate in the field could earn as much as $10,000 a year, Chuck concluded accounting might just be the right profession for him.

His father’s suggestion turned out to be sound advice. Chuck went on to earn his undergraduate and graduate degrees in accounting and embarked on a career that would find him in top leadership positions at leading companies including AT&T, Bank of America, Hughes and Northrop Grumman.

Now retired, Chuck and his wife Lisa—a practicing CPA before stepping away to raise their two daughters—enjoy mentoring accounting majors through their involvement with California State University, Northridge and advancing health care as proud supporters of Torrance Memorial Medical Center.

After young Chuck received his dad’s advice and checked out the accounting profession, he says, “I agreed that was a good choice for me, and for the next 30 years, that’s what I pursued.” He took bookkeeping and business machines classes in high school, then enrolled at Cal State Northridge as an accounting major.

Upon graduation, he took a position with Haskins & Sells (now Deloitte), one of the then Big Eight accounting firms. Ten years later, at the age of 30, Chuck made partner in the firm.

Lisa also had a clear idea of her career choice from an early age. She planned to become a dentist and enrolled in the predental program at UCLA. A family emergency prompted her to change course. She wanted to find a major that would allow her to graduate ready for employment, rather than invest four additional years in dental school. So halfway through her junior year, she switched her major to economics, attending summer sessions to complete all the requirements in time for graduation.

She began working for Security Pacific National Bank, then moved to the corporate offices of A.J. Industries, a multi-industry manufacturing company headquartered in Brentwood that was later sold. It was there Chuck and Lisa met. Her company was one of Chuck’s clients.

After the pair started dating, Chuck offered Lisa the same advice his father had given him: he urged her to become a CPA. That didn’t scare Lisa away. She began studying for her license, which she earned after she and Chuck were wed at Wayfarers Chapel in 1982.

They moved from Northridge to the South Bay and have lived in Palos Verdes ever since. The pair maintain an active lifestyle that includes golf and biking, both locally and abroad. They enjoy taking adventure travel bicycle trips with friends that provide close-up views of some of the world’s most scenic areas as well as wine-tasting excursions in California and Europe.

After 17 years at Deloitte, Chuck’s largest client, Hughes, recruited him to join them. He accepted a corporate controller position and went on to become chief financial officer (CFO) and then president of the company. During his early years at Hughes, he earned his master’s degree in accountancy at Cal State Northridge by attending classes at night.

He later joined AT&T as CFO, commuting weekly from home to New Jersey for three years. He attempted to retire at the age of 50 but was soon recruited by Northrop Grumman as CFO. After another attempt at retirement, Chuck later became CFO of Bank of America, where he again commuted across the country, this time to Charlotte, North Carolina.

He retired “for real” at age 60 and continues to serve on corporate boards of major companies. Over the past 20-plus years Chuck has served on several boards, including AT&T, Microsoft, Morgan Stanley, Northrop Grumman and Wells Fargo.

Today Michelle works in public relations advising luxury resorts and hotels and serves as the family’s vacation planner extraordinaire. Jennifer hewed closer to her parents’ field, studying accounting at NYU and is a manager with Chuck’s former employer, Deloitte.

Both sisters and their husbands live in Dallas. They have traveled with Lisa and Chuck on numerous occasions, including a 2018 trip to Paris before either daughter had married. “Not only did we have a lot of fun together, but we got to see how our daughters and their longtime boyfriends interacted. It was a great way to get to know our future sons-in-law,” says Chuck.

The three couples have a tradition of leaving on Christmas Eve for a weeklong trip. “We’re usually on an airplane having dinner together Christmas Eve, then we go to sleep and wake up in a new city,” says Lisa. Destinations have included Marrakesh, London and Napa.

A belief in giving back

Lisa and Chuck place a high value on philanthropy and have shared that priority with their daughters. Both girls participated in the National Charity League (NCL), a program of service for grades 7–12. The organization provides opportunities for mothers and daughters to volunteer with local and national nonprofits and helps the adolescents develop leadership skills. Lisa worked in the NCL Thrift Shop for 12 years during her daughters’ successive terms.

Cal State Northridge alumnus Chuck is a director emeritus of the board of the CSUN Foundation, and the couple helped fund a campus building, now christened the Charles H. Noski and Lisa J. Noski Auditorium. They also support other on-campus initiatives. About eight years ago, they decided to start a scholarship program for accounting students in financial need.

“I held three part-time jobs when I was in college,” says Chuck. “I was envious of the full-time students who could be involved in campus organizations and have a richer experience. I wanted to make that possible for students in similar situations.”

The Noskis grant four full scholarships to four accounting students each year. The students must maintain a B average to receive funding each subsequent year. Their only other requirements, Chuck tells recipients, are to “work hard, graduate and, at some point, give back to students like yourself when you can.”

About 30 students have now received a Noski Family Scholarship. “It’s an amazing group of young people,” says Chuck, who notes most are the first in their families to attend college, and some are even the first to complete high school.

Noski Family Scholarship alumni stay in touch with the Noskis and form a de facto support group amongst themselves. “Chuck mentors them from day one,” says Lisa. Chuck adds, “This is the most satisfying thing I’ve done in my career.”

As for their connection to Torrance Memorial, “Our initial exposure was 12 years ago when I was thrown from my horse and broke my collarbone,” recounts Lisa. (She and daughter Jennifer ride Dutch Warmblood horses.) “At the emergency department, I was taken in immediately and treated for my pain and a very badly fractured clavicle. My orthopedist of choice, Dr. Stephen Nuccion, who had treated Chuck for two rotator cuff surgeries, happened to be at the hospital and treated me immediately. This was the beginning of our very positive impression of Torrance Memorial. We decided to get involved after that experience.”

The Noskis are Patrons of the Torrance Memorial Foundation as well as Ambassadors who donate annually to fund care in neuroscience, orthopedics, cancer and cardiovascular disease. “We are impressed by and grateful for the leadership, the organization and the caregivers of Torrance Memorial,” says Lisa about the couple’s decision to become Patrons.

She has high regard for the Polak Breast Diagnostic Center, which provides screening and diagnostic services to women in the South Bay through 60,000 annual exams provided in four community locations. “I am very appreciative of their state-of-the-art equipment, and it gives me comfort and confidence I am getting the best care for good health,” she says. “And it is so easy—a very small time commitment!”

Lisa recently attended an Ambassador-sponsored program featuring board-certified internist and cardiologist Nadia Curran, MD. “She educated a group of women about the importance of women’s cardiac care and how heart challenges are a bigger mortality risk for women than cancer,” says Lisa. “Dr. Curran did a fabulous job of making everyone feel comfortable and welcome to ask personal questions.”

The Noskis are also grateful for the care Lisa’s father received through Torrance Memorial’s hospice program in 2021. “I had no idea the breadth and support hospice could offer,” says Lisa. “Everybody was so caring and kind and professional. The nurses, the 24-hour phone support, the chaplain and the doctor gave me the confidence we were doing everything we could for my father. I never imagined I’d have that kind of support which helped make me feel I was never alone.”

In addition to appreciating the care provided at Torrance Memorial, the Noskis have high regard for president and CEO Craig Leach. “Craig and I both started our careers at Deloitte and have stayed in touch,” says Chuck. “He is an exceptional leader and an important force driving the hospital forward. Health care in the U.S. is a changing landscape, and Craig has done a great job of keeping Torrance Memorial Medical Center foot-forward.”

It appears in the case of the Noskis, father really does know best. A piece of sage advice given to a young boy blossomed into two gratifying careers. And thanks to the generosity of the couple who pursued those careers, many lives have been changed for the better. •