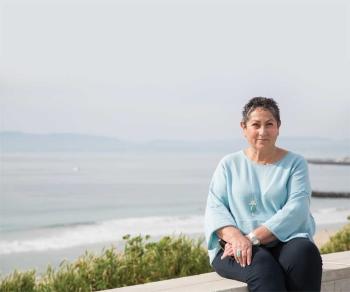 While living with AFib for 26 years, Redondo Beach resident Barbara Hancock never lost hope that she would find an alternative remedy for her chronic disease. At age 79, her persistence paid off. Last October she underwent a procedure on the forefront of AFib treatment—WATCHMAN™ Left Atrial Appendage Closure (LAAC) therapy.

Atrial Fibrillation (known as AFib) is an abnormal rhythm of the heart caused by a fault in the organ’s electrical system. This ultimately causes an irregular heartbeat that is too fast or too slow. This common type of arrhythmia affects more than 5.1 million people in the United States. While the disease itself is not life-threatening, if left unmanaged, it can lead to a stroke or heart failure. In the beginning, living with AFib was tough for Hancock. She could feel a pulse going through her entire body at times when her heart had erratic rhythms. But as the years went on, the surges became unnoticeable. Since her diagnosis in 1991 Hancock had been on blood thinner medications to manage her disease. But side effects included dizziness, which interfered with her ability to be active. Warfarin requires frequent blood testing to check levels so the dose can be adjusted appropriately. As a result, she felt restricted in her ability to travel and make plans.

Hancock also lives with chronic rheumatoid arthritis, making her ability to move and exercise not only difficult, but also painful without regular use of over-the-counter pain relievers such as ibuprofen or naproxen. However combining these drugs with Warfarin can cause dangerous bleeding. To manage her AFib, Hancock spoke about alternative treatments with her doctor, Gene Kim, MD, a cardiologist who specializes in electrophysiology—the electrical activity of the heart. While many treatments were not appropriate for someone who had lived so long with the disease, she qualified for one therapy in the trial phase. Based on her age, long-term AFib and high-risk factor for stroke, Salman Azam, MD, an interventional cardiologist who would perform the procedure with Dr. Kim, told Hancock she was the ideal candidate for the WATCHMAN procedure. While not a cure for AFib, it could make her life easier.

“She was stuck with the option to treat her arthritis or take blood thinners to prevent stroke,” said Dr. Azam. So while she chose to prevent stroke, it meant living with disabling pain. Now Hancock and the doctors at Torrance Memorial Medical Center just had to wait for FDA approval.

The stroke/AFib connection is complex. For those with the disease, there is a pouch in the left atrium of the heart where blood can pool. After an extended period, blood can then form a clot. If that clot leaves the heart and moves to the brain, a stroke can occur. AFib increases a person’s risk of stroke by 500%. It’s responsible for 15 out of every 100 strokes.

Dr. Azam says that while the WATCHMAN procedure has been around for more than a decade, for a majority of that time it was in the clinical trial phase.

The procedure is not without risk. The chance of bleeding and further injury exists any time a foreign object is inserted into the heart, according to Dr. Azam. After testing was completed around the world and in the United States, the FDA looked at the data and decided the benefits clearly outweighed the risks and recently approved the procedure.

“National trials show as time went on, the operators who perform the procedure became better and better at it, and the risks decreased significantly,” says Dr. Azam. Today the success rate is as high as 91% and risk of complications has dropped to less than 4%. In 2016, Torrance Memorial became the first hospital in the South Bay to offer the procedure and one of the few in the greater Los Angeles area. Hancock was Dr. Kim and Dr. Azam’s first patient. In the short term, patients who undergo the minimally invasive WATCHMAN procedure can expect to be up and walking within just a few hours and usually go home the next day. In the long term, patients like Hancock can aggressively treat their arthritis and not have to worry about excessive bleeding.

During the WATCHMAN procedure, a plug is mounted on a wire and placed inside a long tube. The tube is then inserted through the patient’s vein in the groin area, using ultrasound and X-ray to guide the plug until it reaches the pouch in the left chamber of the heart. Once there, the WATCHMAN device opens like an umbrella and the plug is mounted into the opening of the appendage, sealing it. The position of the plug is then verified through ultrasound to ensure it is stable. Six weeks later, the patient returns for repeat ultrasound study to ensure the plug is still appropriately positioned and no significant blood flow into the pouch is noted. Eventually the tissue of the heart grows over the plug. At that time, the patient can safely take pain medications after discontinuation of the blood thinners.

Dr. Azam warns that the patient will still need blood thinners for at least six weeks to ensure no blood clots form at the site of the plug. Therefore this procedure is not for someone who cannot tolerate blood thinners at all.

“As soon as the procedure was complete and I went back for a recheck, I bought a big bottle of Aleve,”Hancock says. She is now happy to be able to better manage her arthritis.

She continues, “I wasn’t incapacitated in any way. I didn’t feel bad from it (the WATCHMAN procedure), no pain. Nothing.”

Hancock, who arrived in the South Bay in 1966, fell in love with beach living immediately. “I can walk out my door and go down to Knob Hill to see the ocean,” she says. Now almost half a year after her WATCHMAN procedure, and more than a year out from back surgery, she hopes to start getting back to more regular exercise and enjoying her physical freedom.

“This was the only option for me and it was a fantastic option,” she says.