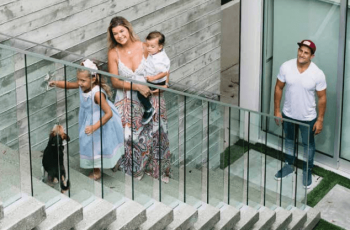 It’s just past 8 a.m. and Jarrod Dogan rolls over the wood floor of his modern, minimalstic-style Hermosa Beach home atop a skateboard covered with several-inch-high artificial grass. His 21-month-old son—wavy curls partially covering his eyes—stands at the front of the board, securely held by dad, and giggles past the floor-to-ceiling window overlooking the pool downstairs.

“He speaks Portuguese, Spanish and English,” Jarrod proudly says of his son Sol, which means sun in Portuguese. Sol, it seems, likes to get up with the sun, while his 5 ½-year-old sister Lua (which means moon) likes to sleep in. Lua, roused by her Brazilian-born mom Celi, soon joins the family with her bedhead of blond waves, to give daddy a quick hug before he heads off to work.

“This is what I wear to work,” Jarrod says pointing to his board shorts and graphic tee. His intensity quickly shifts to a more serious topic—the work itself. Jarrod is the founder and CEO of Hybrid Apparel, a portfolio company of Altamont Capital Partners. “We don’t sell suits; we sell what’s hot to the kids, so my real job is keeping up with the trends and remaining relevant to the customers we sell to.”

“I have always been passionate about clothing, design and color,” Jarrod continues in a rapid-fire South African accent. “I watch the trends and am influenced by what people are wearing.”

Two decades ago at age 21, a close call in his hometown of Johannesburg, South Africa, propelled Jarrod toward early pursuit of that passion. He was carjacked at gunpoint while on break from college in England. He awoke in a hospital to find his shoes gone and 18 stitches in his head. Fed up with the violence in his hometown, the incident prompted him to pack a few belongings and $1,000, say goodbye to his family, and board a plane to America.

Jarrod took a job at a clothing company in San Diego. A year later in 1997, he started his own business designing, selling and printing T-shirts in the back of a print shop. He spent the next few years working long hours, sleeping on a couch in the back of the company’s warehouse in East Los Angeles and showering at the gym downtown.

Today, Hybrid Apparel has evolved into a full-service apparel house, specializing in the design, manufacture and production of all categories and classifications of apparel. Jarrod still maintains his laser-sharp focus and works long hours, but now runs the business with the help of 2,500 employees globally.

“I’m relentless at whatever I do, but I don’t look for the fame and glory. I don’t like to be around anything pretentious. We’re very private people and I like to keep my name out of it,” he says. “I’m humble, hungry and always looking to find purpose in all I do.”

Two years ago at age 39, he realized that his unyielding drive and constant travel had a price. “My hormones were off, my cholesterol was high,” he says. “I woke up and said, ‘How can I take better care of myself?’” His first step was to lose 40 pounds. But he also began to consider the health of those around him. He stepped up integration of the company’s wellness culture. He began by placing a larger emphasis on healthy offerings in the company café and encouraging workers to exercise in a 18,000-square-foot gym located in the Cypress-based headquarters. Jarrod is often found working out with employees in a variety of class offerings that include yoga, spinning and functional training classes.

“When you’re in the gym we’re one; it’s not us versus them,” he says of the bond he strives for with employees. “I’m passionate about clothing but more importantly passionate about winning and building an organization of people.”

Wife Celi shares Jarrod’s mindset. The former physical therapist aims to recreate for her family the same simple, healthy life she experienced while growing up in Sao Paulo, Brazil. She works out every day—including the day Sol was born.

Celi moved to Hawaii from Brazil when she was 23. In the late 1990s she relocated to Santa Monica, where a friend—believing they might make a good match—introduced her to Jarrod. Through his relentless drive, she saw a “good heart.”

“He is a gentleman and always treats everyone fairly.” But it was Jarrod’s Chihuahua mix Doogie, who really played matchmaker. “Doogie went right up to her and wouldn’t leave her alone. He doesn’t do that with anybody else, so I knew I had a winner,” Jarrod says.

With their health-conscious mindset, it didn’t take much convincing when close friend, and Torrance Memorial Medical Center Patron John Hirshberg, suggested the Dogans support a cause to benefit the community’s health. Hirshberg is founder of Tour de Pier, an annual stationary cycling event on the Manhattan Beach pier plaza to benefit cancer charities. He introduced Jarrod to Judith Gassner, senior director of development and principal gifts for the Torrance Memorial Foundation. Considering the health of their young family, and also Jarrod’s parents and siblings, whom he had moved to America, the Dogans became major donors.

Shortly after, a series of family health crises affirmed their decision. Toddler Sol fell from a changing table at his swim school and was treated in Torrance Memorial’s Emergency Department for an eye so badly bruised it remained closed for a week.

“The doctors were really good at calming down our high-energy son. I could tell they really knew what they were doing,” says Celi.

Months later in August, ever pushing his limits, Jarrod began experiencing frightening symptoms while on an extreme mountain biking trip in Mammoth.

“I couldn’t breathe, I was coughing up blood. My heart rate dropped to 62. Mammoth Hospital said if I didn’t get to sea level, I could potentially die,” he says.

Doctors diagnosed Jarrod with pulmonary edema, a condition that can develop at high altitudes, causing excess fluid to accumulate in the lungs.

“I immediately had someone drive me to Torrance Memorial,” he says.

When he arrived, pulmonologist Deren Sinkowitz, MD, recognized the potential gravity of his condition. “He was incredible. I wanted to leave, but he looked me in the eye and said, ‘You’re not going anywhere. We are going to monitor and take care of you.’”

“It’s only when something serious happens to you that you realize there is no amount of money you could pay for good health care,” Jarrod says. “Supporting this hospital is the best decision I ever made for myself and my family.”

Next on the horizon for Jarrod and Hybrid Apparel is continuing to evolve the technology, speed and methods in which apparel is brought to market and guiding his employees to reach their potential. The company is closing in on a global deal with The Beatles and also a big acquisition. But of equal importance is relishing the moment. His four-year game plan includes taking a two-year sabbatical to travel the world with his family.

“I came from nothing, I came here with nothing. Now I just really want to help people,” Jarrod says. “When you believe in people the possibilities are endless.”