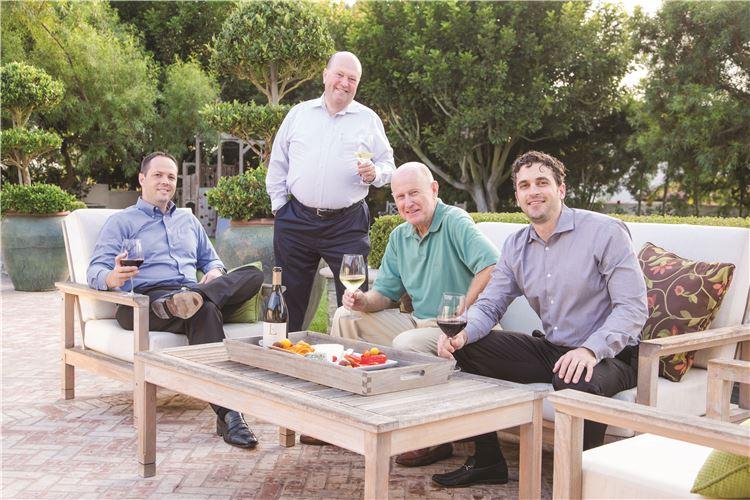 Joseph Hohm and Steven Spierer have been friends for nearly 40 years. Their friendship has led to a partnership in real estate investments and joint family vacations. Hohm and Spierer are also aligned when it comes to supporting local health care. Both are members of the board of the Torrance Memorial Foundation.

Their two sons, Brandon Hohm and Joseph Spierer, are also longtime friends. When Brandon and Joseph learned of an opportunity to join a relatively new group aimed at connecting younger Torrance Memorial supporters, they wanted to know more. In 2012, the Torrance Memorial Young Physicians and Professionals Alliance (YPPA) was established to bring together young physicians and successful professionals in the South Bay community. The group’s mission is to promote engagement in dynamic social gatherings that allow for personal and professional networking, while increasing awareness of and support for Torrance Memorial. The group provided Brandon and Joseph the perfect opportunity to carry the torch. They have been active members of YPPA for the last two years.

Patrons recently spoke with these father-and- son teams, to learn more about what drives their involvement and dedication to Torrance Memorial.

Son Brandon is also no stranger to service. After graduating from college, he joined the U.S. Army and became an Army Ranger. Brandon spent four years overseas during his eight years in the Army. His first deployment was to Southern Asia with the Army’s 1st Special Forces Group. Embedded with Brandon’s unit was a Forward Surgical Team (FST), which exposed him to the lifesaving work doctors and nurses do, as well as the medical needs of the populations in third world countries.

“When our counterparts were hit and we had several dozen coming in wounded in action/ killed in action, one can feel helpless but also very grateful for the skills and services of the medical team,” Brandon says. “Soon after this first deployment, I became an EMT so I could do more and be prepared should a medical emergency arise.”

After the Army, Brandon worked in the energy sector as a process chemical engineer in oil and gas production. He recently joined his father’s accounting firm.

“I made a donation to the hospital after my wife gave birth to our daughter at Torrance Memorial,” Brandon says. I received a call from Laura Schenasi within 24 hours, saying that I was now a member of YPPA. I’m more than willing to do something for the hospital, given its role in the community and the people and lives it supports.”

Joseph Hohm believed his friend Steven Spierer would be an “excellent addition” to the Foundation board and suggested to Judy Gassner (the Foundation’s senior director of development and principal gifts) that he be invited to serve. Steven Spierer, Esq., is a founding partner of Spierer, Woodward, Corbalis & Goldberg. He has now served on the Torrance Memorial Foundation for two years.

“My son Joseph and I have both volunteered with other organizations before but are new to Torrance Memorial,” Spierer says. “We believe we need great medical care in the South Bay. It matters a great deal to us for the welfare of our local communities and for the health of our own families; that’s why we became involved.”

Spierer continues, “It was a natural extension of our personal and family friendship and our business partnership. I am proud to be a part of the support network for Torrance Memorial and grateful for the opportunity to serve.”

Spierer adds that Torrance Memorial’s recently announced partnership with Cedars- Sinai is one of many positive developments in the hospital’s ongoing delivery of top-notch medical care to the community members of the South Bay. For this, Spierer credits the leadership of Craig Leach and philanthropists Melanie and Richard Lundquist.

“The joining of these two excellent health care organizations will create an even greater ability to serve everyone’s needs yet remain local enough to understand the South Bay community and its members,” Spierer says.

The younger Spierer, Joseph, of Joseph Spierer Architects, credits his involvement with YPPA for enabling him and other members to raise awareness about Torrance Memorial and its services in the community, and to help raise money through events. Joseph cites the annual Casino Night as one example of a special event where attendees can enjoy a night of fun, socializing and gambling. At the end of the night, all the money “won by the house” is donated to the hospital.

YPPA also works to recognize employees at Torrance Memorial through support of the monthly Daisy Award, presented to exceptional nurses and “The Reason is You Award,” presented to employees who go above and beyond.