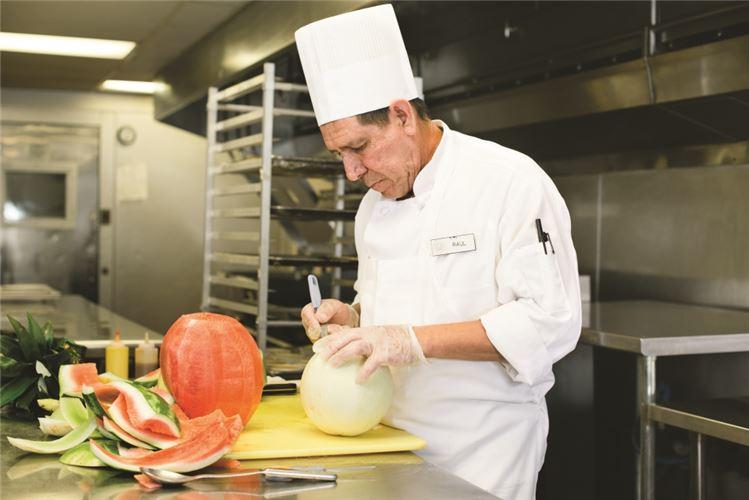 October 19, 2012 began like any other day for 54-year-old Raul Mendieta. He went to work in the banquet kitchen at the Queen Mary in Long Beach, where his specialty is creating elaborate carvings using vegetables, fruit, chocolate and other edible items to adorn buffet tables at events. After leaving work that evening, he stopped at a restaurant to eat dinner. While there, his father called and asked if he would pick him up at the bus stop.

Father and son stopped at a nearby convenience store, where the younger Mendieta sat down just outside the front door and waited for his dad to step out with a few groceries. The disturbing moments that followed were captured in a dark, blurry cell phone video that posted on YouTube and was replayed on news channels across the country.

“A man who I didn’t know walked up to me. We stared at each other,” Mendieta says in Spanish through an interpreter. “As he walked away, he kept looking back at me. But I wasn’t worried because I don’t have a problem with anyone.”

Mendieta continues, “The next thing I saw was a huge light. Then I heard a bang. I was covered in flames.” The glaring stranger had returned from the dark to throw a Molotov cocktail into Mendieta’s lap.

What Mendieta remembers next is running across the parking lot while on fire. He could see people looking at him through the smoke and flames, but no one tried to help. He began repeatedly uttering the words, “Oh Lord, you’ve been in this world. You know about pain. Save me.”

Just then, he noticed a man walking toward him whom he recognized from the bus stop. “He helped me put out the fire,” Mendieta says.

Within minutes paramedics arrived and quickly placed an oxygen mask on his face. “I remember the AC [air conditioning] inside the ambulance felt cool,” he says. “I could see my father through the window looking at me. The last thing I recall is saying to the police officers, ‘Take care of my father. Take him to a safe place, because I don’t know who did this or what they are after.’”

The incident was a random act of violence. Detectives soon learned the assailant had just been released from jail and had robbed a store earlier that evening around the corner from the convenience store. More than 100 police officers began a manhunt that night that led to an arrest in Downey.

Mendieta was transported to Torrance Memorial Burn Center, one of three verified burn units in Los Angeles County that admits 130 to 150 people annually into its 12-bed wing. Upon his arrival, a highly trained care team specializing in burns, reconstructive plastic surgery and complex wound management spun into action to save his life. A week later, Mendieta awoke from a drug-induced coma to find bandages covering his legs.

“When I woke up, I couldn’t feel my legs,” he says. “The only thing I did was give thanks to God that I was alive.”

With 42% of his body burned and having endured an inhalation injury, Mendieta’s predicted mortality upon arrival was as high as 60%, according to burn and reconstructive surgeon Matthew Reiss, MD, who became his primary care doctor at the Burn Center. In cases where there is such a large burn and lung damage from smoke inhalation, a medical coma is induced to stabilize the patient and the patient is placed on a ventilator and feeding tube. During the critical weeks that follow, the Burn Center staff ’s specialized training comes into play.

“The pathophysiology of burns makes it a unique disease process that requires medical treatment and fluid management that is very specific,” Dr. Reiss says. “The other important issue is the extensive dressings and specific pain management that burn unit nurses are uniquely qualified to do.”

“We have a physical therapy team attuned to the unique issues of a burn patient, where the skin itself is the limiting factor and requires a number of specific techniques, including massage and stretches.”

In this case, Dr. Reiss and the care team also had another weapon working in their favor: Mendieta’s strong will to live. “I was most impressed with this mental recovery—his attitude and motivation. He was a fighter from the beginning,” Dr. Reiss says. “His family was also very supportive and here every day. These factors made a big difference in the speed and fact of his recovery.”

Mendieta and the staff celebrated each small recovery milestone. In January he was able to once again eat on his own without the help of a feeding tube. “He was very active with physical therapy and wanted to get back to his life,” Dr. Reiss says.

Persistence paid off. After 11 months of rehabilitation, on August 20, 2013 Mendieta was able to return to work. Today, two years later, he still wears special compression socks due to chronic lymphedema—a condition where fluid collects in the tissue—but has retained full use of his legs. Near normal sensation has also returned.

“I am very thankful to God and to the care team at Torrance Memorial,” Mendieta says. “They fought as much as I did to keep moving forward.”

In December 2014 Mendieta had an opportunity to express his gratitude. The Burn Center staff, along with current and former patients, came together at the Queen Mary for a holiday party and celebration of life. Mendieta worked in the kitchen to help prepare a buffet for his special guests.

“The reason we had it there was because of him,” Dr. Reiss says. “Our staff doesn’t often get to see the long-term outcomes of our patients, so seeing them at a celebratory occasion helps keep them enthused about the work they are doing. Our biggest goal is to get patients as close as possible to their previous life. On this front with Raul, we were very successful.”