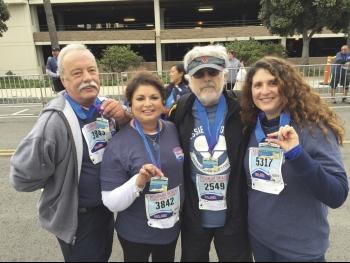 Jessie Savolt of Torrance was only 36 when she developed acute mitral valve regurgitation, a condition that occurs when the mitral valve doesn’t close properly and allows blood to leak backward into the heart. Savolt had become extremely sick very quickly, with troubling symptoms that included severe fatigue and shortness of breath. After being diagnosed, she underwent two consecutive mitral valve replacements—one mechanical and one tissue.

But even after the valve replacements, Savolt continued to suffer from heart disease complications. She lived with ever-worsening heart failure for nearly 20 more years before finally, at age 55, receiving the heart transplant that saved her life—a transplant was facilitated through a unique partnership between Torrance Memorial Medical Center and Cedars-Sinai.

Savolt describes her journey through the various stages of heart failure as exhausting. Happily married, a mother and a grandmother, she enjoyed her family. However her illness meant Savolt couldn’t fully participate in many important family milestones. She also had to give up her job as a computer analyst at Northrop Grumman. “I missed an awful lot,” she says.

Throughout most of her illness, Savolt was under the care of the team at the Torrance Memorial heart failure program. The group included cardiologists Benjamin Rosin, MD, Erol Kosar, MD and Mark Lurie, MD, as well as nurse practitioner and program coordinator Roxanna Balter. “That team was amazing. They were incredibly thorough and they really cared about what happened to me; they became like family,” says Savolt. And that feeling is mutual. Balter remembers her patient well. “Savolt was always upbeat and refused to let her illness get her down. She was pretty remarkable,” Balter recalls.

Still as time went on, it became increasingly clear that Savolt’s best option was to get a heart transplant. She was added to the heart transplant list at a local medical center, but after a two-year wait, her overall health was deteriorating and her situation was becoming more complicated. Given these issues, she needed to go to a transplant center that could handle a very complex case. That’s when Dr. Lurie decided to send Savolt to the Smidt Heart Institute at Cedars-Sinai—a decision that saved her life.

A top-notch academic medical center with the largest heart transplant program in the United States, Cedars-Sinai was uniquely prepared to care for Savolt. And the close working relationship between the Torrance Memorial and Cedars-Sinai specialists facilitated the transfer of her care to the Smidt Heart Institute transplant program. The transition was seamless and quick, and the Torrance team was in touch the whole time.

Savolt was put on the transplant list at the Smidt Heart Institute on August 19, 2015 and received her call just three weeks later on September 5. Her reaction was total shock. “I was running around the house not knowing what to do first. After waiting for so long, I couldn’t believe this was actually happening,” she says.

The surgery went extremely well—but her story doesn’t stop there. She went in to cardiac arrest twice while at Cedars-Sinai, and the second time, the surgeons performed an open-heart procedure right in her room to stabilize her before they brought her to the operating room. “Their goal was to save the heart, and they absolutely did. That heart is doing just great, thank you very much,” says the grateful patient.

Savolt can’t say enough about the Smidt Heart Institute team. They saved her life—several times—and without their expertise and experience she would not have made it through the transplant and her subsequent complications. She is also extremely thankful to Dr. Lurie and his team at Torrance Memorial. Without them she probably would not have gone to the Smidt Heart Institute for her transplant care.

In 2016, Savolt and her husband renewed their wedding vows in Hawaii. She is now a grandmother for the second time. She walks her three dogs, spends time with her family and just completed a Super Bowl 5K. Savolt also went back to Smidt last week for her six-month checkup. Her heart is perfect and she was able to see all of her doctors again. “They always stop by to say hello. There is a lot of hugging. I feel really, really lucky,” she says.

Written by Michelle Abt