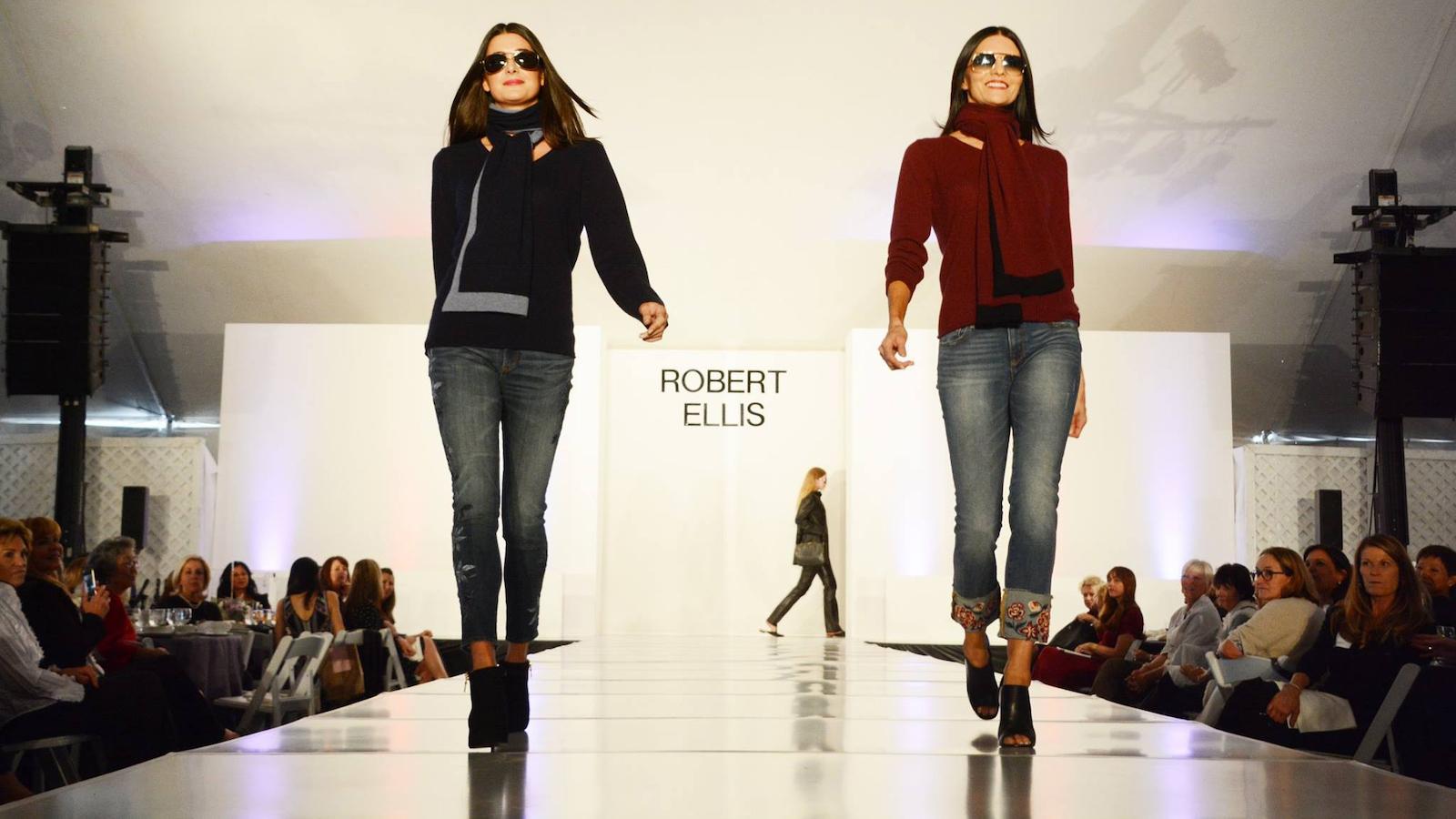 No Room for Humbug at the Holiday Festival Fashion Show

On a cool, wet Tuesday morning following the long Thanksgiving weekend, hundreds of ladies (and a few men) are hurriedly scurrying to close their umbrellas and squeeze inside the entrance to a large, white tent. They’ve ventured out in their sharpest red and green attire to make their own holiday fashion statements at what has become a 20-year tradition that kicks off the South Bay holiday season in style—the Torrance Memorial Holiday Festival Fashion Show.

A ticket to the Fashion Show gives you a passport to an elegant, all-day event that begins with boutique shopping, moves on to a delicious lunch, dazzles guests with a top-notch fashion show and culminates with more boutique shopping complete with unique fashions, jewelry, purses and accessories. All proceeds benefit the Torrance Memorial Foundation.

The Fashion Show is part of the annual Holiday Festival. It’s a joint effort between the Las Amigas volunteer organization at Torrance Memorial, which plans and operates the festival; the Luminaries, another volunteer group that sets up the shopping boutiques; the Torrance Memorial Foundation; fashion show co-chairs; and countless other volunteers and donors.

“We are grateful to have an impressive cadre of volunteers that contribute their time and talents to the Fashion Show, Gala and Holiday Festival,” says Judith Gassner, senior director of development and principal gifts with the Torrance Memorial Foundation.

The show began in 1995 with 150 guests. It has grown into a much-anticipated community event, with tickets selling out in advance and an annual guest list topping 625.

The event is the result of the contributions of many people and moving parts. One of these is fashion show choreographer/producer, Carin Holmenas. Holmenas was introduced to Gassner 10 years ago by the owner of the Jonathan Boutique of Redondo Beach, who provided clothing for the show for several years.

Gassner recruited the services of Holmenas to provide clothing. With that came her skills for the production and choreography of the show. Holmenas is a former model who has been in the fashion show production business for charity events for 20 years. “I always have the audience in mind when I plan a fashion show and want everyone to be entertained. Hopefully, they will want to wear the clothes they see,” Holmenas says. “I try to present collections the audience can relate to, worn by models that suit each piece—all while staying true to the designer’s vision.”

The Fashion Show captures the talent not only of Holmenas and the featured designers but also the professional models. Typically 10 females and four males work the runway for each Torrance Memorial show. Holmenas works with the same models regularly for a variety of shows. They are handpicked based on the collection being shown. Models do their own hair and makeup to contain costs. Each model has a professional dresser to assist them.

“Music is one of the most important elements of a show and sets the mood for the models and audience,” Holmenas says. “The right music emphasizes the clothing and helps the models have fun while working the runway, which makes for a happy audience too.”

Another trademark feature of the show is its exquisite floral designs, from the unique arrangement that greets guests at the tent entrance to the beautiful centerpieces placed at each table where guests dine. The flowers are donated by Rolling Hills Flower Mart. They are the artistic creations of mother-and-daughter team Christine Gaudenti and Chelsea Gaudenti.

Christine has donated her arrangements to the Holiday Fashion Show and Gala for approximately 12 years. She was first introduced to the show as Gassner’s guest. “I felt immediately compelled to become a part of these events and have been ever since,” she says.

Christine, a florist for the past 20 years, passed the torch to her daughter Chelsea last year. Chelsea has been involved in the family business for as long as she can remember. The Gaudentis must consider the availability of floral varieties and their durability during the month of December. They also look at the theme of the collection being shown and trends in floral design.

Also proud of their involvement with the Holiday Fashion Show are co-chairs, Nadine Bobit, Kelly Piken, Linda Perry and Nina Tarnay. All view themselves as ambassadors to promote the event to family, friends and the community. Bobit, a member of the Foundation board and executive committee, also volunteers in the Emergency Department at Torrance Memorial.

Piken says, “I help with this popular community event as a way of supporting the hospital in a fun and meaningful way.” Perry adds, “Millions of dollars have been raised for the hospital and I’m very proud to be associated with it.”

According to Tarnay, attending the Fashion Show is “a great way to start the holiday season by having a lunch date with friends and family. I also feel it’s important to share with others what services the hospital offers and what they do for the community.”

New attendees are often surprised to learn that the models in the event are not all human. Canine members of Torrance Memorial’s Pet Visitation Program parade down the runway with the Holiday Festival committee while adorned in holiday hats and garb.

The only complaint one may have about the Holiday Festival Fashion Show is that when you leave the big white tent, your face just might hurt a bit from smiling so much.